So, this is the mess we ended with last time. 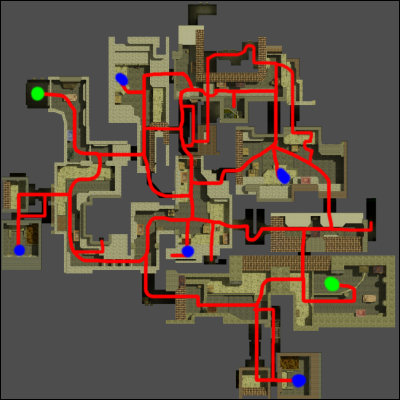 …which is precisely the last thing I delivered to Valve. Rather wisely, the talented souls at Valve realised I was perhaps heading for disaster and kindly took the map and salvaged all they could to produce what became ‘Casbah’.

That’s the story over. The interesting stuff here is what went wrong and how it was corrected…

Casbah was originally a bit like Canalzone - several flags that both teams try to capture. However, Canalzone works because it is very open. Casbah was very tight and maze-like. The two don’t mix, so it was changed for traditional CTF instead.

The main, big, glaring problem with my Casbah was it’s complexity. As you can see above, it was a spiderweb of connecting routes and little niggly details. 80% of them serve no gameplay purpose or share a particular role with another route. That is, several routes are doing the job of one. That’s bad for flow and for players. It’s confusing.

Look at Valve’s Casbah and that’s been fixed. The only minor routes are ones that actually serve a purpose - for example to sneak through the central alleyway area or to find a secondary route to a well-defended flag area. Every single route serves some purpose and has obvious advantages in particular situations.

My Casbah featured a number of ways to get from the blue team capture point to the red team capture point, which again is confusing. Look at the Valve version, and all the complexity has been removed with one major route between the two sides. That’s all a CTF map really needs, and also explains why Casbah can lead to some very hectic, exciting games - everyone is focused onto one main path.

My Casbah was very Dust-like in it’s height variation (i.e. pretty much all on the same level), but TFC is a very different game to Counter-Strike. TFC needs height variation for some classes to even be worth playing. These were added in as platforms overlooking flag areas.

Finally (as you can see from the overviews), it was given a nice, healthy, golden glow and bathed in glorious sunshine. Now all my gameplay demons had been expelled from the map, it was playable and fun!

So, main points. Things I did wrong: bad/no planning, lack of direction, over complication, too much complexity. Things Valve did to fix: reduced to one major path, added sensible variation (not too much), and notably removed the bad bits. Those were the same lessons I took home: simplicity is king and often, deleting bits is much than piling more on.