Now, I was going to write about something dull like how to get the most out of level geometry, but I had a far better idea before I got the first word out.

A week or so ago I had a little idea for an HL2DM map, pretty much following the same rules as football (aka ‘soccer’), so nothing very special there. I drew up a little plan, which consisted of one long stretch of road, with a barricade at either end for each team, each protecting the respective goals.

Now, usually that’s perfect. It’s simple, it’s neat, it’s symmetric, and it’s tidy. However, it wasn’t very HL2-ish. It was also rather flat, and a bit too easy. It lacked depth.

I then spent a while sat in front of Hammer, looking at the rough set of brushes I’d laid out to see if I could make it any more exciting, but I couldn’t. Everytime I had an idea, looking at the brushes brought the original right back to me. It was like trying to picture a rhino whilst playing a staring game against an elephant - I just couldn’t get the elephant out of my head.

Once the RSPCA had come to return the elephant to the Zoo, I grabbed a piece of paper and drew a quick sketch of the basic area I was having trouble with. Usually, the paper would then end up with more sketches of the same area with a few changes, but nothing too impressive. This time, I couldn’t be bothered to redraw the whole thing again, so I drew a little box, and simplified it to a little road with a mark in the middle. The mark is where the ball would start. 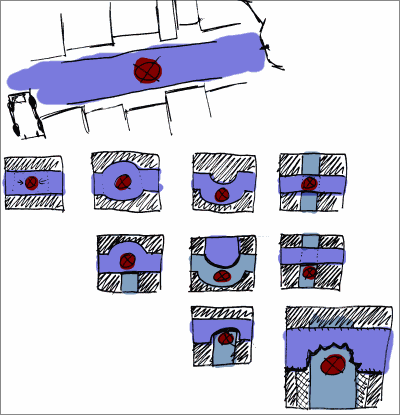 Drawing the little diagram took all of 10 seconds. It was pretty neat, so I drew a few more, just trying to come up with extremely basic alternatives to the simple, straight street, each time picturing them in0 my head as I drew them. First came a road with a circular centre, then one with a kink in it, then something totally different - a two layer road in a cross shape.

I then took these, and tried to evolve each of them a bit. The circular one lost a side and gained a lower-level road. The kinked one got a raised platform in the kink. The cross one had the ball spawn point moved to the lower road. Suddenly I had loads more ideas, just by keeping everything to a bare minimum.

By this point I had the map pictured in my head, so I just needed to concrete it. I did another quick drawing, consisting of a road with a half-circle cut out of it, and a road below it with the ball spawn point. This led immediately onto the idea of two roads, one crossed over the other, the upper road missing a big chunk directly above where the ball spawns.

Back to Hammer, creating a new map, and mapping this basic thing out, it felt a lot better. Just 10 minutes earlier I had been going slightly crazy trying to work out what I could possibly do, and now I had a solution. A simple solution that still gave me room to play around a bit when actually making it. 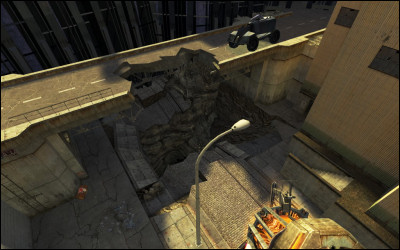 The screenshot above is what came out of it. It’s nothing spectacular at all, but the strange doodles I did really helped come up with something a little more interesting. As I was making it, I decided that the ball would spawn out of a big, dark crater-like pit, hence giving the whole structure some background and reasoning.

In a way, the process was like accelerated brainstorming. By intentionally taking the very simple principle out (“a road with a ball in the middle”), and drawing this in the tiniest of spaces, I was able to focus on the basic idea. I then evolved this into a few other ideas, stemming from the first, still trying to keep it simple, until they converged onto a solution I liked.

I’ve since tried this method a couple more times, and it’s worked a treat, even just for finding a slightly more interesting alternative to what was essentially a hallway with a door at the end. Of course, a simple hallway’n’door really shouldn’t require doodling to think around, but it did leave me come up with some truly leftfield alternatives…