A lot of people don’t know this, but Dust wasn’t my first Counter-Strike map. On the other hand, a lot of people do know this and are cursing me for suggesting otherwise. Either way, it’s true and having now written a paragraph intro we can continue onto better things.

There was one thing that got me into CS mapping. I can still remember it - I was bored. I had been mapping using HL textures for ages and was bored sick of it. I’d been trying to play this new “Counter Strike” (beta 1) mod, but everytime I took damage it crashed on me so I wasn’t too hot on that. Beta 2 changed that. But it wasn’t necessarily the gameplay nor team behind it that got me CS mapping. It wasn’t it’s style, the background or even the subject matter. It wasn’t the (tiny) community or the numerous bugs and exploits that were tremendous fun to play with. It wasn’t even the cool webpage that cliffe (Jess Cliffe) changed every three weeks. It was a tiny little file of only a meg or two that some artist called ‘MacMan’ (Chris Ashton) had put together. It was a WAD full of textures. Boredom had a new enemy.

Half an hour later and I had a slither of a map. A tall 2-floor wall made of brick, and a couple windows at the bottom. A quick duplicate later and I had the same wall twice as long. A few more duplicates and I had a courtyard shape. A few weeks later and I had what could only be called ‘cs_retire’, although it couldn’t be called that due to 8.3 filename limitations and became ‘cs_tire’ instead. A nice, fresh, battered War-Torn Retirement Home.

This rubbish title was where it all started. 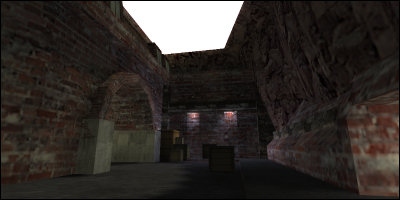 (Yes, it really was that dark on everyones monitors except for mine.)

Tire did of course get a lot of things right to get that far. It also did a lot of things wrong. For a start, before it even got into beta 3 it underwent some fundamental changes involving an entire route being removed going from the roof near the CT start all the way through to Colin’s Tower (the big building with the spiral staircase named after my brother for some reason.) This gave CTs three routes to take immediately.

This was the first tip I recieved about mapping for Counter-Strike, and it came straight from cliffe himself: “do not split teams into more than a couple of routes at the start of a map” (paraphrased somewhat as that was from 6 or 7 years ago.) It’s stuck with me ever since. He’s right. It’s common sense, isn’t it? In a team game, keep the players together!

The route was removed. Both teams had only a couple of choices. The same rule was used in Dust… and Dust 2… and Cobble… and it always worked. 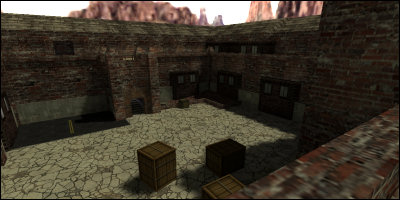 Up until that point I had never thought about mapping so much, but suddenly there was theory. Thought. Sensible logic and reasoning. All of a sudden, mapping wasn’t just about making something look pretty and giving the player a chute to follow. It was about controlling the player and obeying certain sensible restrictions. It was about engineering within limits, limits that existed purely to make the game fun.

Tire was also very educational. A few months later when I went back to fix bugs (which included giving it sunlight that wasn’t near pitch-black for people with sensible gamma settings) I saw problems. High r_speeds. Bad texture scaling. A weird lift/elevator I still can’t remember making. My favourite room (if only for the lighting). There were of course bigger problems (like the insane scale and repetitive texture choice) but suddenly improving the gameplay was all I cared about. 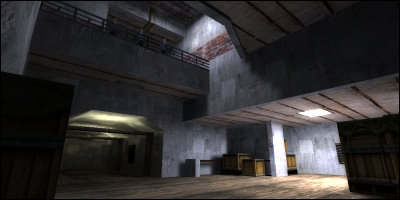 Still, there are some aspects of Tire that I think worked well. The balcony (above) was one - nothing spectacular (in fact it was closed off in the last release) but balconies like that appeal to me for some reason. The sense of scale was another. The underground sewers I was very proud of (they weren’t just square, wet, boxy concrete corridors like in every other map at the time.) Looking back at it today, I can see how the fundamentals were slowly being learnt. 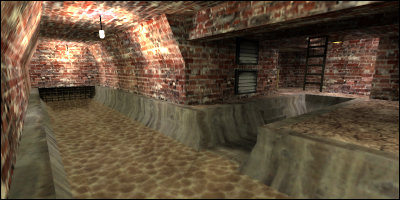 Alas, come beta 5, Tire was gone; out of the official map rotation. By then however, Hell was already freezing over: the success of Tire had got cliffe to unite myself and MacMan for the purpose of creating a new defusion map. Dust was already in its second revision.

Of course, a simple little WAD wasn’t the only thing that ended up with me doing what I do today, but without it Dust may never have happened (and a different, better and more popular map made by someone else would have taken its place…) Either way, that one tip from cliffe was possibly one of the most important lessons I ever learnt.