Quake 2 grew on me very rapidly. And, just like before, I got to work copying parts of it and also trying to change bits. The first level was freely downloadable in source form, so I started editing that and working out how all the fun stuff was done, like transparent water and coloured lighting. Once those basics were covered, I started trying to copy more complicated parts of levels, the whole time building a better understanding in my head about why the levels were built and stylised in the way they were.

For the longest time I was stuck making maps in the ‘base’ style, although I dabbled with the other themes occasionally too (brown was the colour of choice back then.) Like Quake, I ended up with hundreds of half-finished maps and half-executed ideas, but in the process had developed a taste for the designs and themes, and worked out what worked and what didn’t.

The moral so far: copying for your own education is good.

Most of my days with Quake 2 were spent looking at not only the original maps, but the additional ones made in the community. Some are absolutely beautiful. I tried copying their styles too.

Then Half-Life came out. I immediately jumped onto the bandwagon. I started making ETC within a few weeks.

However, it wasn’t the end of me playing with Quake 2. Whenever I got to a dead-end in ETC, I went back to Quake 2, and continued work on a map I had started a bit before, ‘djdm1’ aka ‘Evenings’. 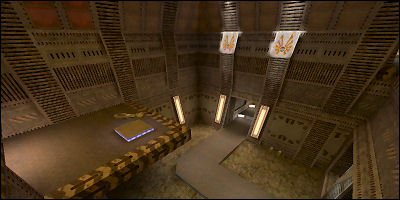 Evenings was, in retrospect, a pretty bad map. A maze of a place, with some very hacked-together areas and no overall structure. Much of the item placement was directly influenced by other maps. 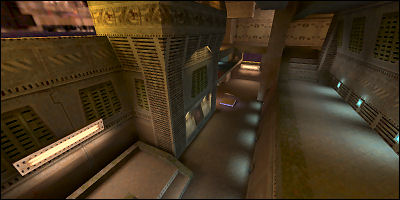 The area in the above screenshot was one of my favourite bits. I remember thinking how clever it was - a platform that you had to drop onto, in order to reach health! Amazing. 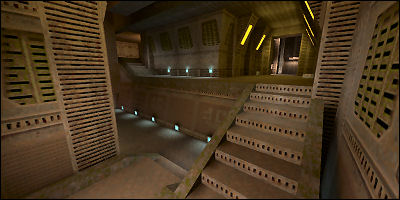 Quake 2 also taught me far too much about stairs and changes in height. It was much more important to make architecture fit and feel ‘right’ than it was in Quake. Things looked out of place much much easier (this gets more and more true with every new engine.) 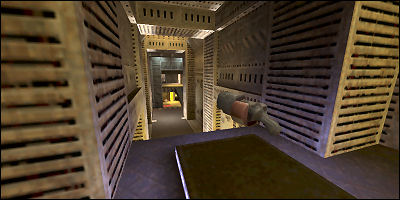 The above screenshot shows one of the most hacked together pieces. It was really just a hub for three or four tunnels which had to meet somewhere. Getting the brushwork to fit and look half-good took a lot of work and aggrevation, and eventually I admitted defeat. That was a lesson learnt.

Evenings was uploaded to cdrom.com on May 1st, 1999, making it my second-ever released map. According to the text file, it took 5 days to make. That can’t be right.

Of course, after that, things got a bit boring. First came ETC. Then I made War Torn Retirement Home (cs_tire). Then, my fifth map… Dust.

I started editing maps when I was 11. I was 16 when I released ETC and Dust. Today, I’m 22. That’s half of my life making maps already!

Where did it all go?