I read or heard something the other day about the problem people have with doing something (yes, I’ve forgot entirely what that ‘something’ is or was, but bear with me). The issue most people had with this something was never being able to go from nothing or something (the other something) to anything/something good.

With that covered, I can now apply it to level design and actually make sense.

One of the issues I come across as a designer is not quite knowing where to start. My head can be pounding with ideas, visions, angles and concepts, and my desktop littered with reference shots and doodles, but getting the first few pieces down is always difficult. It always feels like a committment - the first few brushes you place must stay there. The area you’re building is indicative of the final product. When this bit fails, I become disheartened and struggle to take it anywhere further.

Thinking of cs_compound I was wondering, if I had made it, where I would have started. What particular feature of the map would decide the outcome of the rest of it? If my mind was empty, where would I begin? 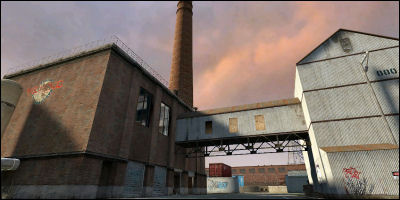 The answer was the catwalk in the middle of the map, between the two buildings. That would set the scene. Large height differential, excellent view. Openness. That’s what would have triggered the design of the rest of the map the way it is - it is built from those very principles. That single structure would have been the starting point for the rest of the map design. It’s designed around those buildings, that catwalk, the fantastic view and how you, as a player, would counter that advantage. It’s a very basic concept for a 3D game, but was used perfectly and separates it from the existing CS:S maps.

My point is, if you’re trying to make a map, you should start with something brave. Design something unique. Don’t start by designing a room and a corridor - where does that take you? The best maps come out of simple concepts that set the stage for the gameplay. The most enjoyable/fun maps (not the ones which one finds easiest to play/win) always have something unique about them, and are the maps which gamers find themselves most drawn towards (or away).

Once you’ve got your basic principle (or ‘gimmick’, although that springs up the wrong images), you can work outwards - how can you exploit features of it to offer fun gameplay? How does that single idea, that single principle, open up the door to an entire experience? You know you’ve hit a good idea when the floodgates open in your head and it grows from there.

So, always work from the inside out. Forget about making a map. Instead, think of yourself making something fun from a simple idea. The simpler the better. Once you have got this into your head, everything becomes a lot lot easier.