Where I live is quite industrialised. Despite being a fairly small town, it has many buildings and warehouses dating back a hundred or even two-hundred years. Big, brick buildings, some amalgamated onto modern processing facilities and others left abandoned.

Some of these buildings are pretty huge considering their age, many floors high and a good hundred or so metres long. Some are longer, or taller. Going past them on the train each day, you see broken windows, hastily-repaired walls and sometimes even a flicker of light or even life inside, but generally they’re dark, still, and intriguing. 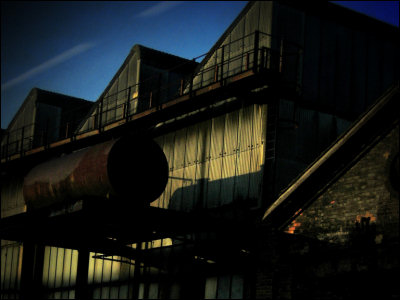 There’s something rather special about transferring that same amount of character and intrigue into a map. It’s essential for immersiveness. It’s extremely difficult to do, but even getting a slightest hint of life can be rewarding. The hard bit is knowing where to start.

For me, an immersive entironment is one that makes my mind wonder. It turns on the same bit of the brain that gives children nightmares when they’re alone, at night, in the dark. It’s the bit that made Doom - at the time - seem so real and alive. Put another way, the environment doesn’t tell you everything; it leaves some things for your imagination. It holds you back. You’ll find the most enthusiastic gamers are also some of the more imaginative ones.

Now, say I was to try mapping out one of the aforementioned buildings I see every day on my way to work. I want to maintain that immersiveness and atmosphere as much as I can. It would be tempting to recreate the whole building down to every room and every detail. From a practical standpoint that would be insane, and from a gameplay perspective too, it wouldn’t work. It might also be an accurate representation, but not what I would consider immersive. If I created all of it, I know what is where and what is there. For everyone else it would be simply about learning how to get from A to B. There would be no sutained intrigue. Once someone has learnt about every crevice, there’s nothing left to wonder about; all intrigue is lost.

I would argue that instead it would be better to restrict large areas, and make less than half of the area actually accessible. Give the player access to a couple of major areas, but leave significant parts of the building completely inaccessible (that really don’t exist because you haven’t built them). Give hints to their existence and their purpose. Leave question marks. The key is to make the player feel restricted but intrigued in the same way I am on the train every day. Keep the “what if…” questions going as long as you can. “What if I could get past this barrier?” “What if I could get up to that platform?” Try to hold back the “I wish” questions.

Great examples of this: (predictably) the first few levels of HL and HL2. They restricted you. They gave you hints but they didn’t let you everywhere. The train station of HL2 is actually rather small, but seems much bigger because the player has no way of working out how big it really is. They didn’t tell you everything and you had to make guesses and assumptions about where places would lead. cs_Backalley is another map that I think did this very well.

The danger is restricting the player too much, or not telling them enough, making them feel like they’re on a ghost train. Provided everything makes sense however, and everything has reason, this shouldn’t be a concern.

Right now, lots of amateur maps are going the wrong way. They’re trying to be bigger, more detailed, and more complete than the last. That’s not the way to do it. Always leave something to the imagination. Leave some blanks. Let the player’s overactive brain fill in the rest.

I’ll have another ‘Cruelness’ piece up in a few days, which I’m sure will be incredibly cruel and merciless. Also remember that it’s SiN Episodes day tomorrow (Wednesday) blah blah etc. etc. so get off your tractors and play it when it’s out.