Having finally getting round to playing de_port a lot last week, and a bit of BF2 in the last day or so, and then cross-referencing this with my many years of FPS experience (haha) I think I’ve finally found the single thing that I enjoy most in any of them. 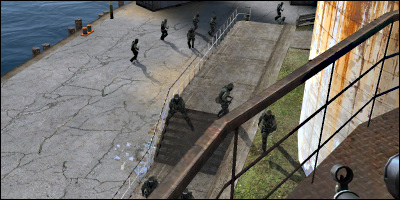 But that’s not simple enough. I also have to be on the team that by default, does not control that area. It has to be completely unexpected to the victim. So in Port, I play as a Terrorist. In BF2, I’m the USMC, and try to sneak in. In TFC, on Well, I play as a sniper at the very top of the flagroom lifts.

I’m not sure what it is about these positions that I enjoy so much. Maybe it’s the view, or the advantage, the safety, or the risk, but it’s these elements that make the games fun. I don’t even need to be a sniper in order to enjoy playing in those positions. It’s just fun.

I feel this is quite important with level design too. One of the attributes that has been attributed to Dust’s popularity is that it does allow sniping, sneaking, sprinting or spraying, and you can be successful at any of them. A map centred around only one of those will only attract a certain type of player (fairly obviously), and a map centred around all but one will fail to capture everyone.

Similarly, although you might be able to snipe, sneak, sprint or spray in a map doesn’t mean those aspects are really present. The map needs specific thought and planning such that those play styles are guaranteed to offer some level of success to the player. This means getting structures placed appropriately and giving players the opportunity to use them. It’s another one of those things that constantly goes round in my head whilst making CS maps because, without those features, players won’t give the map a chance at all.

Enough typing, I’m off to snipe some more unsuspecting people from the moon.